The TLC recently named hundreds of drivers as part of its latest annual Honor Roll. Here are some of the TLC drivers going above and beyond to serve their local community.

The Honor Roll has been running for the past eight years and celebrates TLC drivers and their achievements.

In the latest Honor Roll, drivers were recognized across several categories. These included vaccine heroes, drivers with good safety records, and long-time drivers who have years or even decades of service behind them.

Drivers were also awarded for their service to wheelchair users, and for supporting the rollout of electric vehicles.

New York City is known for its diversity, with people from all over the world making it their home. The same goes for its drivers. And it’s a good time to celebrate drivers’ different backgrounds, especially during Black History Month.

Here are some of the drivers who were honored, and why.

For the first time, the TLC recognized 20 women with the Gertrude Jeannette Achievement Award.

Gertrude Jeannette was the first female taxi driver in New York City, which she began doing in 1942. 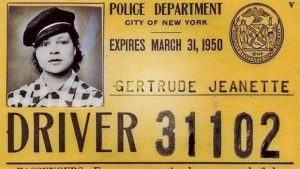 She moved to the city from Arkansas, and replied to an ad looking for women to replace male taxi drivers who had gone off to fight in World War II.

Ms. Jeannette is one of the many female drivers the TLC has celebrated as it marks its 50th anniversary. Currently, there are about 8,100 TLC female drivers on the road today.

The 20 women who were honored came from across the five boroughs, and between them have completed over 2 million trips during their careers. Moussa Bakayoko was one of the drivers recognized for his work in helping New Yorkers get vaccinated safely at home.

He says he was proud to be part of the program, which helped people unable to get to a vaccine center by providing taxi rides to nurses. Nurses were then able to give the vaccine to people in their homes.

Moussa says he built a relationship with the nurses, and came to see them as family. Raisul Karim was honored as the first TLC driver to get the vaccine.

He says because he was in a lot of contact with nurses and doctors and the public, he wanted to have the vaccine to protect his family. Raisul says he used the Vaccine Finder website to sign up for his shot as soon as he could. Gurvinder Singh Deol has been a taxi driver for 30 years.

He says his safety record comes from experience, and because he wants to give a good service without rushing and without stress. He says it was important to him that passengers get in the cab happy, and leave the car happy as well. Aparna Srinivasan was also recognized for safety. She runs the Spot On Brooklyn base, which caters to people traveling with their pets.

In total almost 600 TLC drivers were recognized for their safety achievements. These drivers had a clean safety record and managed to avoid being involved in a serious car accident in the past three years.

Between them, the drivers that were honored for safety completed more than 7.3 million trips between 2018 and 2021. Izotou Tchedre started driving taxis in 2015, and since then has completed over 500 wheelchair accessible trips.

He says he chose to offer wheelchair accessible rides based on the advice his parents gave him to always help and respect others.

He was one of 20 accessible drivers who were honored by the TLC for providing trips to wheelchair users across the city.

You can watch the full video celebrating some of New York City’s best TLC drivers here:

INSHUR’s TLC insurance coverage has been trusted and recommended by over 14,000 TLC drivers like you over the years. To get  a TLC insurance policy in just three minutes, visit INSHUR today.

What you need to know about Wheelchair Accessible Vehicles